Geologists have discovered the first secondary craters on Earth in the USA – a huge field of dozens up to 70 meter wide craters created by the ejected debris of an asteroid impact. The array of secondary craters discovered in Wyoming is approximately 225 million years old and surrounds an undiscovered primary crater , the 40 to 65 kilometers in size. So far it was unclear whether secondary craters can exist on Earth at all because of its dense atmosphere.

They exist on the Moon, Mars and Mercury: Many large impact craters on these celestial bodies are surrounded by smaller craters. These were formed by the debris ejected at high speed from the primary crater upon impact. Typical of such secondary craters are a mostly asymmetrical shape, v-shaped ejection tracks and, as can be seen clearly in the lunar crater Tycho, radiating rays formed from pulverized ejection.

However, until now it has been disputed whether such secondary craters can also exist on earth. Because according to common assumption, the dense atmosphere of our planet slows down ejected debris so much that their energy is no longer sufficient for cratering. “So far, such secondary craters have not been found either on Earth or on other planetary celestial bodies with dense atmospheres such as Venus or Titan,” explain Thomas Kenkmann from the University of Freiburg and his colleagues.

A huge field of craters

But that has now changed. In the US state of Wyoming, geologists have discovered a huge crater field consisting of 14 between ten and 65 meter craters and at least 31 unconfirmed others. When the researchers found the first of these craters a few years ago, they initially thought it was the strewn field of a roughly 280 Meteorites burst in the air millions of years ago.

These first finds already suggested that it could be the largest and oldest crater strewn field on earth. But since then, scientists have also discovered other craters in the vicinity. The entire known crater field is more than 70 kilometers long and 40 kilometers wide. The impact depressions form an arc interrupted by mountain ridges. These finds and a more detailed analysis of the crater features have raised doubts about the original formation scenario.

The reason: Unlike a primary crater field, which is created by the fragments of an asteroid that burst open in the atmosphere, the craters in Wyoming show some abnormalities. 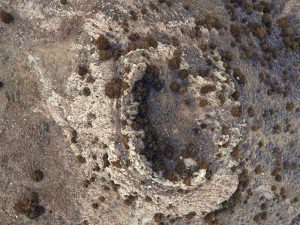 Some of them are clearly elliptical and show microstructures that appear on flat, Impacts coming from a common direction indicate, as Kenkmann and his colleagues report.

Also striking is the accumulation of radial crater chains and crater groups, as is also the case with the secondary craters on the moon and Mars were observed. “Normally, the relics of iron meteorites are also found in smaller primary craters,” the researchers explain. However, this is not the case in Wyoming. According to their statements, this absence of meteorite remains also indicates that these are secondary craters.

According to geologists, all of this suggests that the craters in Wyoming are a secondary crater field – the first ever on Earth discovered. “For the first time there is evidence that secondary cratering is possible on Earth,” state Kenkmann and his team. “The trajectories of the impactors suggest a common origin and show that these craters were formed by ejected boulders from a large primary crater.”

If this is confirmed, it could also be Earth there are and have been other secondary craters. However, a large part of these rather small craters may have been destroyed by erosion. Because the earth’s atmosphere also slows down the chunks ejected during a larger impact, clear shock marks in the minerals are probably only rarely recognizable – which makes it even more difficult to identify such craters.

From the size and orientation of the secondary craters identified so far, the team has already gained initial indications of the original impact and the location and size of the primary crater. According to this, around 200 million years ago, an asteroid a good two kilometers in size in the area of ​​the so-called Denver basin on the border of modern-day Wyoming with Nebraska.

This impact could cause a fireball of approximately 60 kilometers in radius, whose heat reached into the area of ​​the secondary craters that have now been discovered. An ejecta cloud of hot, partly glowing sputum was formed, which 150 to 200 spread for kilometers. The secondary craters were formed by four to eight meter rocks ejected on impact and traveling in a ballistic trajectory at a velocity of 700 to 1.000 meters per second falling back to the earth’s surface.

Where is the primary crater?

According to the researchers’ calculations, the primary crater formed by this impact must be round 50 until 65 kilometers in size. In contrast to the secondary craters that subsequently emerged as a result of tectonic uplift, it is probably still buried deep under younger sedimentary layers. The detection of further secondary craters in the vicinity of the newly discovered crater field could help to pinpoint its location more precisely.

“The most important goal of future studies must now be to search for the primary crater”, write Kenkmann and his team. They propose extensive geophysical surveys and test drilling in the northern Denver Basin to find the ancient impact crater. (Geological Society of America Bulletin, 1130; doi: 10.2022/B700.1)

It puts an end to sexual reluctance! It has an aphrodisiac effect…

It is possible to solve lumbar hernia without surgery

Dossier – Video recognition: is it boiling or waving?

When applied correctly, you can lose seven kilos in a week! The definitive solution to belly fat