Cooperations cut: The war in Ukraine is also having increasing consequences in science and space travel. Cooperation with Russian research institutions is on hold, specialist journals are debating a boycott of publications by Russian researchers and there are also initial cancellations in space travel. Some major international research projects, on the other hand, are trying to find a middle ground – and work on the International Space Station ISS will continue as before for the time being.

Russia’s attack on Ukraine on 24.February 2022 not only has serious consequences for the populations of the affected countries – the effects of this war and its political background are reflected in the noticeable throughout the world. In addition to the consequences of war and sanctions for energy supply and world market prices for oil, gas and many foods, the conflict between Russia and Ukraine also leaves its mark on science.

Actually, the principles laid down in the International Science Council and other bodies stipulate that no scientist may be discriminated against because of his political views or nationality. The freedom to research, exchange data and publish should not be restricted even in the event of war. In practice, however, Russia’s attack on Ukraine has long since had an impact on science.

Cooperations are put on hold

The first Western research institutions made the start on the day after the Russian attack on Ukraine: The renowned Massachusetts Institute of Technology (MIT) in the USA closed on 25. February his cooperation with the Moscow Skolkovo Institute for Technology and Science, which has existed for eleven years. A little later, the EU Commission excluded Russia from its research program Horizon Europa. 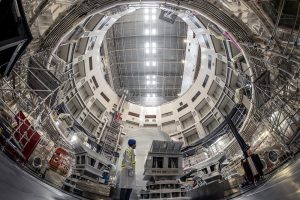 Russian institutions are also involved in the construction of the fusion reactor ITER. So far this international collaboration has been continued. © ITER Collarboration

The research center CERN, worldwide center of particle physics and operator of the particle accelerator LHC, tries to find a middle ground: The 23 Member states of the collaboration voted on March 8 to strip Russia of its observer status and ban its representatives from CERN Council meetings. However, the more than a thousand Russian physicists who are involved in CERN projects or use their scientific data may continue for the time being.

No sanctions have so far been imposed by the International Astronomical Union (IAU) or the ITER fusion reactor project. Both claim that they are supranational and deliberately non-political organizations. “ITER is a product of the Cold War and is therefore deliberately impartial,” says ITER spokesman Laban Coblentz.

Many German research organizations, including the German Research Foundation (DFG), the German Aerospace Center (DLR) and the Max Planck Society, have put all cooperation projects on hold. Applications from projects with Russian participation will no longer be processed, scientists from ongoing cooperation projects have been asked not to exchange data, samples and devices for the time being.

“We are aware of the consequences of these measures and We very much regret this,” says a statement from the Alliance of German Science Organizations. “A lot of research work is designed for years and is being massively affected by the current war situation.” Despite these measures, solidarity also applies to Russian scientists, who are appalled by Russia’s invasion of Ukraine.

The German X-ray telescope eROSITA is currently inactive because it is installed on a Russian satellite. © MPI for Extraterrestrial Physics

The boycott even goes so far that even the German X-ray telescope eROSITA was temporarily switched off because it is mounted on a Russian satellite and data transmission takes place mainly via Russian receiving stations . The telescope has completed four of eight planned all-sky survey passes.

Conflict between Roscosmos and ESA

However, war and sanctions could have even more serious consequences for space travel. The Russian space agency Roskosmos has already on 24. All employees withdrawn from the European spaceport in Kourou in February. As a result, launches of the Soyuz rockets used there for medium-sized payloads have become impossible. The European Space Agency ESA now has to reschedule the launches that have already been planned. “We will examine for each European payload whether they can be launched with the available launch vehicles or future Vega-C and Ariane 6 rockets,” ESA said in a statement.

Conversely, ESA may consider abandoning its involvement in two upcoming Russian lunar missions. For the Luna-25 mission in July 2022 European partners deliver a landing camera for Luna-27 the navigation system, a drill and a mini laboratory come from ESA. However, ESA has not yet made a clear statement as to whether this cooperation will continue.

The most dramatic consequences of the Ukraine war could be for the International Space Station ISS. Because it consists partly of Russian modules and is inhabited by cosmonauts. In addition, the life-support systems of the station are so closely interlinked that it would not work without Russian participation. For example, a module from the USA provides the power supply for the Russian side, while the transport rockets docked at the Russian part provide the thrust that allows the ISS to maintain its orbital altitude or to avoid space debris.

This is one of the reasons why international cooperation on the ISS has so far outlasted all political conflicts. Even now, everyday work on board seems to continue as before. The crew of the space station currently consists of two cosmonauts, four US astronauts and the German ESA astronaut Mathias Maurer. Although the German Aerospace Center (DLR) has broken off all cooperation with Russia, the mission of the German astronaut does not appear to be affected by this for the time being.

According to NASA, also the upcoming flights to the ISS and the planned experiment will take place regularly. At the 18. March is a launch of three Russian cosmonauts from Baikonur to the ISS is planned, on 30. the two cosmonauts now working in orbit and one NASA astronaut will return to Earth on the Soyuz.

However, the flight of the European ExoMars planned for this year is in acute danger Rovers to the Red Planet. Originally, the rover was to be sent to Mars from the Russian cosmodrome Baikonur in September. But nothing will come of it: “The sanctions and the broad context of the war make it very unlikely that ExoMars will start in 2022. “, says the ESA.

But this does not only mean the third postponement of this Mars mission, it could even mean its end, as some planetary researchers fear. On the one hand, the next start window for Mars flights will not open until 2024, on the other hand, the adjustment of the rover and the remaining mission components could another launch vehicle will be so time-consuming and expensive that the project will be abandoned completely.

The problem: The cooperation on this and other space projects is so close and interlinked that it is difficult to do so is to separate this now without losses. The scientist involved in the mission, Lev Zelenyi, from the Russian Space Research Institute in Moscow, told Nature a few days ago that he understood ESA’s motivation very well, but thought it was the wrong decision. “Enormous efforts by scientists, engineers and technicians from many European countries, not even from Russia, will then have been completely in vain,” says Zelenyi.

A panacea: The benefits of molasses

French lady found drowned in her cellar, she was 88 years old

Every second is deadly: we're on the phone 4.8 hours a day!